Antique and Classic Sailboats for sale

Both antique and classic boats are considered to be rare, vintage and collectible commodities and hobbyists continue to buy, sell and trade these types of vessels.
Read more on Antique and Classic Boats 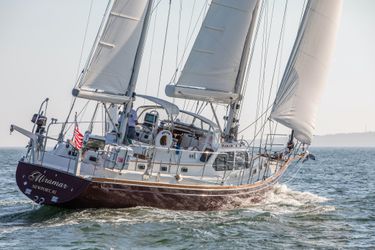 Miramar, a fitting name for a yacht of this caliber, "to look at the sea". The name ...Read More Antique and classic boats refer, as their name suggests, to craft that are older in design and construction. They may include modern boats designed to more classic lines, and generally are the more beautiful craft you might come across, with beautiful varnish work and more traditional fittings and materials. Hull shapes are often sleeker and long, some craft may be from a 'gentleman's yacht' tradition, while others may be former working craft converted into a pleasure craft. Classic sailing boats may feature more traditional type rig designs, such as gaff rig and often have a larger sail area than more modern boats.

How are Antique and Classic Boats built?

Prior to the 1950’s, most privately-owned boats and yachts were built out of wood. Fiberglass entered the mainstream boat building industry in the fifties, eventually becoming industry-standard by the mid to late-sixties. During the 1970’s there was also a big uptick in the amount of aluminum hull boats built, often favored because they were lightweight and did not rust or rot. However, there’s a certain romance that surrounds a wooden boat and these types of vessels still attract many nostalgic, purist boaters. Some even claim a wooden boat handles softer and better than fiberglass or steel-hulled vessels.

What Types of Engines Power Antique and Classic Boats?

Early antique power boats were powered by small two-stroke outboard motors. The first outboard motor that had mainstream success was Evinrude (founded by Ole Evinrude in 1909). Other early outboard engine manufacturers included Johnson, Atwater and Lockwood. In the mid-sixties, four-stroke outboards began to gain popularity as they were cleaner and quieter than two-strokes. By the 1970's Honda had become a well-known manufacturer of marine outboards, followed next by Yamaha in the early 1980's.

What Optional Equipment is Available for Antique and Classic Boats?

Antique and classic boats do not have as many built-in amenities as today’s modern yachts and boats. Nonetheless, there are still some unique features available onboard these types of vessels. Much like recreational vehicles of the era, vintage boats (especially cabin cruisers and so-called “weekenders”) came equipped with household appliances like refrigerators, toasters, heaters and diesel generators. Chrome rails, vintage paint color schemes, teak wood accents, MFD (molded fiberglass) styling and creative layouts are some of the standout features.