Sloops date all the way back to the 17​th​ century, offering a sailboat rig that is popular because it can easily head up winds and is ideal for short-handing.
Read more on Sloop Sailing Boats 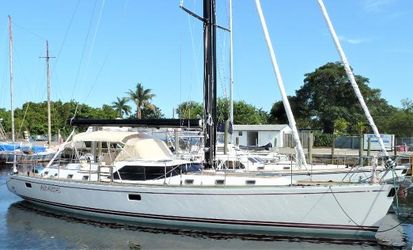 "Andanzas" is set up for extended cruising by it's experienced owners. It's carbon f ...Read More A sloop is a single masted sailing boat with one headsail (as opposed to a cutter which has two headsails). A bermudan sloop is the most common type of rig for a sailing boat, popular due to its simplicity with a triangle-shaped mainsail and a single, loose-footed triangular headsail or foresail (jib or genoa) at the front of the boat. Sloops can range in size from small dinghies to much larger yachts.

Sloops date all the way back to the 17​th​ century, offering a sailing boat rig that is popular because it can easily head up winds and is ideal for short-handing thanks to its simple controls. As recreational sailing grew in popularity, the market for smaller vessels that could be manned by only one or two people did as well, resulting in a resurgence in the demand for the sloop rig during the 20​th​ century. It offers a simpler rigging plan and theoretically can run on just two sails.

How Sloops are built

Modern sloops are generally made from carbon fiber, although traditionally this craft was built from wood like many other sailing boats in the early 17​th​ and 18​th​ centuries. Fiberglass models are generally crafted from molds or by pouring a fiberglass resin over the original wood hull and exterior. There are a number of actual vessel styles that can use a sloop rig, which features a single, larger central mast for easy handling.

What Types of Engines Power Sloops?

A sloop, like most sailing boats, is powered by sails and a rudder, as opposed to some type of diesel or other marine engine. These boats can be outfitted with wind seekers and other items that aid in wind creation, but the attraction of the sloop is that its simple configuration makes it an efficient choice for sailing into the wind with the just sails alone.

What Optional Equipment is Available for Sloops?

Sloops can be outfitted with a number of rigs and sail upgrades, including wind-seekers, storm jibs, spinnakers, gennakers, and other sails and rigging equipment. For sailors who race, there are plenty of performance upgrades, including premium navigation systems, race-inspired radar and satellite systems, and more. Marine stereos, coolers and live wells, and other accessories can be outfitted on sloops, as well.